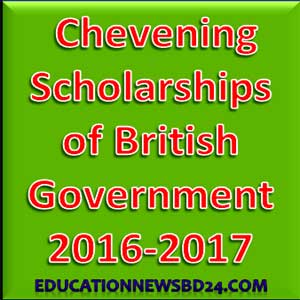 Chevening Scholarships of British Government 2016-2017 has been circulated. Regarding Chevening Scholarships Bangladesh, British High Commissioner to Bangladesh Robert W Gibson CMG congratulates at a lunch ceremony to wish this year’s scholars all the best for their studies. He Said, Congratulations on achieving a Chevening Scholarship. It is the UK Government’s international flagship programme which allows future leaders, influencers and decision-makers from around the world to learn, build on their experience and benefit their country. You will soon be members of an elite club – people who can shape tomorrow’s future. I am proud that the UK is firmly committed helping the future leaders of Bangladesh to seize that potential. 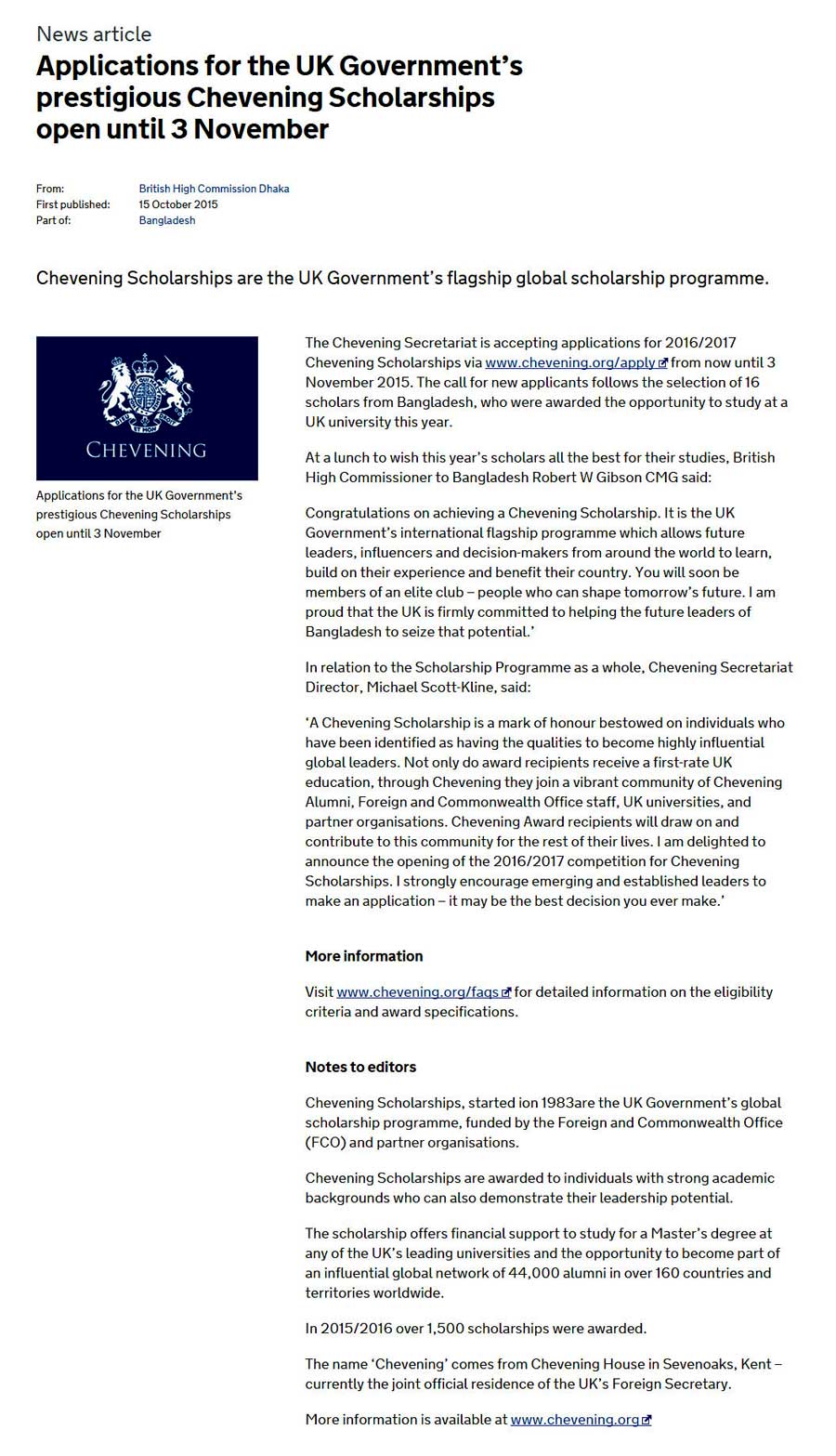 Chevening Scholarships of British Government 2016-2017. Chevening Scholarships started on 1983 are the UK Government’s flagship global scholarship programme, funded by the Foreign and Commonwealth Office (FCO) and partner organisations. The programme makes awards to outstanding scholars with leadership potential from around the world to study postgraduate courses at universities in the UK.

Chevening Scholarships are awarded to individuals with strong academic backgrounds who can also demonstrate their leadership potential.

The scholarship offers financial support to study for a Master’s degree at any of the UK’s leading universities and the opportunity to become part of an influential global network of 44,000 alumni in over 160 countries and territories worldwide.

Visit www.chevening.org/faqs for detailed information on the eligibility criteria and award specifications

Chevening Scholarships of British Government 2016-2017 for Bangladesh. Chevening Scholarships in Bangladesh are awarded to outstanding emerging leaders to pursue a one-year Master’s at any UK university. The scholarship programme provides a unique opportunity for future leaders, influencers, and decision-makers from all over the world to develop professionally and academically, network extensively, experience UK culture, and build lasting positive relationships with the UK.

A Chevening Scholarship offers financial support along with the opportunity to become part of the highly regarded and influential Chevening global network.

Applicants from Bangladesh can choose any course of study, but we particularly welcome applications in the following fields:

Applications for 2016/2017 Chevening Scholarships are now open. Please read the information on this page carefully prior to applying. Applications close on 3 November at 12:00 GMT (midday UK time)

Applications for Chevening Scholarships can only be submitted using the Chevening online application system, available through the ‘apply’ button on this page.

Prior to starting your application for a Chevening Scholarship please ensure you have the following ready:

Please note that only documents in PDF format can be uploaded and documents cannot be over 5MB in size.

You can submit your initial application without these optional documents and upload them to your application at any point up to 14 July 2016.

Please note that if you are eventually conditionally selected for a Chevening Scholarship, it is essential that you provide evidence that you meet the Chevening English language requirements and that you have at least one offer from an eligible course before 14 July 2016 in order to remain in the process.

It is recommended that you read the guidance below to help you submit an eligible application.

Chevening is funded by the Foreign and Commonwealth Office and partner organisations. Our partners contribute to Chevening in various ways, helping us to develop talented individuals from across the globe who will go on to be future leaders and decision makers.

The below partner organisations co-sponsor Chevening Awards in your country, enabling us to offer more Chevening Scholars the opportunity to study in the UK.

If your application is successful and you have applied to study a subject or degree programme supported by one of our partners, you will be considered for a co-sponsored Chevening Award.

Find out more about our partner organisations, the areas of study they support and why they have committed to supporting Chevening in your country by reading their profiles.

An update information has been given here for

If you want to get the available information regarding”Chevening Scholarships of British Government 2016-2017″ please always stay and follow this site:commontarget.net

Let’s get the Top 5 Special Offers you should know about Teletalk SIM! Top 5 Teletalk Special Offers. Teletalk is a government-owned public limited company that’s registered under the Registration of The Bangladesh Joint Stock Companies. Bangladesh government owns all of its shares. It was formed as the Teletalk Bangladesh Company on December 26, 2004,…

This site uses Akismet to reduce spam. Learn how your comment data is processed.